Skip to content Skip to sidebar Skip to footer
Writer Mark WoodenFanfics, writing tips, and thoughts on geek culture with a side of snark! Close
"Shadowdance" saga Music Inspires

Last week I mentioned how music is an influence in the “Shadowdance” action/ urban fantasy saga. Here’s a deeper look at where the saga is going. 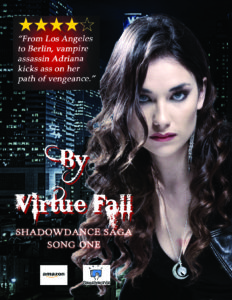 The various songs create the symphony

As I mentioned in part one of this blog, each novel within the “Shadowdance” saga is considered a song.

My goal is to tell several songs in the “Shadowdance” saga. Each will forward the search for the nine Vyntari shards and the warring factions out to get them.

(You can read more about the war on the Origins of the “Shadowdance” page.)

With these songs, I will keep the saga in the urban fantasy milieu. However, I want to bend genres too. I want to have a few political thrillers, a mystery, maybe even a romantic comedy with action.

Okay, probably not the last one, but you get the idea.

I do have an ending in mind that leads to another world entirely. But let’s not get ahead of ourselves.

Each song/ novel will chronicle Initiates gathering/ fighting for shards. We see three shards throughout the first songs, “By Virtue Fall” and the upcoming sequel, “For Her Sins.”

The third song, “Illusion of Love” will bridge us to a new set of three shards and opens lots of potential storytelling. Look for this song in 2020.

(Side note: remember I conceived the “Sahdowdance” saga back in the 20th century well before the Marvel Cinematic Universe and their Infinity Gems. And though I was reading comics at the time of that storyline, it really didn’t factor into the Vyntari shard origins. That, admittedly, was more “Lord of the Rings.”)

Variations on the main symphony

In ballet, a variation is a solo dance. (You’ll see some ballet in a future variation, “Two Sisters,” coming… some time.)

I’m using the term “variation” to differentiate the “Shadowdance” side stories from the main symphony.

Another definition sees a musical variation as a form that is an altered version of a given theme, diverging from it by melodic ornamentation and by changes in harmony, rhythm, or key.

The “Shadowdance Variations” series will be just that: an altered vision of previous events.

These variations will let the “Shadowdance” symphony breathe. They will be canon to the saga, providing information on elements hinted at in the symphony that did not get their full due.

Or you’ll see the missing notes (as it were) from the various songs. Think of them as my way of filling in the gaps for questions like, “How’d they get from point A to point B?”

“A Reason to Live,” the prequel to “By Virtue Fall,” is one such variation. Go read it for free.

(Author note: Yeah, this all sounds like what Lucasfilm is doing with their Episode/ Anthology stuff with the new “Star Wars” films. I thought my Songs/ Symphony/ Variation stuff up when Lucas was pissing people off with the prequel trilogy, but, alas, I’ll look like a copycat. Oh well.)

Days of Future Music Past

Don’t worry. At the beginning of each song or variation, I’ll post a chronology of published works so you can keep track. I do jump in time a bit, so it’ll be helpful.

One day I may even let you in on the full chronology I created to keep everything straight in my head. It sounds like something for Initiated newsletter subscribers…

The descent into the mystery and manipulations of the “Shadowdance” saga will be as exciting for you to read as it is for me to create.

"Shadowdance" saga, How to

How to find a model for your book cover

"Shadowdance" saga, How to

Inspirations and history of an urban fantasy saga