Skip to content Skip to sidebar Skip to footer
Writer Mark WoodenFanfics, writing tips, and thoughts on geek culture with a side of snark! Close
Pop Culture Reviews

A remake of “Death Wish” hit theaters and created controversy due to its apparent pro-gun stance. Director Eli Roth insists the movie is no more pro-gun than, say, “John Wick.”

Let’s look at that

I’m not a pacifist. If someone breaks into your home, shoot the mother fucker.

I don’t want to take all your guns (but we need to discuss semiautomatic rifles).

I simply don’t believe an untrained individual should have the power to kill in multiples.

I also haven’t seen any of the “Death Wish” movies. I won’t see the new one because I hate the idea that Trayvon Martin wears a hoodie and gets killed, he’s a thug.

Bruce Willis wears one and shoots people in cold blood; he’s a hero.

Sure, there’s the “you can’t judge ‘til you’ve seen.” I base this post on the trailers and the myriad synopsis I’ve read of the movie. If I missed anything, “at” me.

Is a “Death Wish” remake relevant?

The FBI Uniform Crime Report chart to the right presents the Violent Crime Rate in the U.S. from 1960 to 2014. 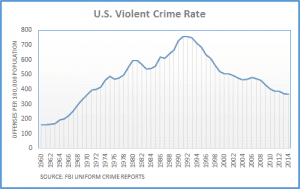 When the first “Death Wish” hit theaters in 1974, crime rates were on the rise. People were afraid crime would come to their door. The idea that an otherwise peaceful man could pick up a gun and defend against the beasts was an ideal.

In an IndieWire interview on “Death Wish,” Mr. Roth says, “So many of the same problems that were plaguing the country — that crime is out of control and police are overwhelmed, and there’s no way to stop it — still feel very relevant today.”

The only reason people believe that sort of thing is because it’s what some media outlets (cough – Fox News – cough – Breitbart – cough) preach daily.

According to the FBI, both Mr. Roth and those media outlets are statistically wrong.

I’m just as guilty as any ‘Merican in loving it.

There are similarities but…

“Death Wish,” “John Wick,” and just about every “man with a gun gets revenge for a wrong” movie has the same basic plot structure. Peaceful man loses family member to criminals, they get a big dick — er, gun and hunt down the bad guys.

“Death Wish” differs from “Wick” and the other films because one movie is intended to be a fantasy. The other is intended as a commentary for discussion.

Hell, one of them is so close to reality it damn well became a reality (see this article on Bernard Goetz).

Can you guess which movie that is?

Willis’s character is an Everyman. He’s the guy down the street. The movie’s advertising enforces this with its “How far would you go to protect your family?”

“John Wick” is as much a fantasy as “Star Wars.”

Fantasies sometimes make socio-political statements through allegory. They are not intended to show you a visible path of real world, literal action.

By using modern political jargon, “Death Wish” does just that.

Why “Death Wish” is pro-gun and disturbing

Worse, the movie shows a powerless/ incompetent law enforcement — the REAL good guys with guns tasked with protecting us from the bad guys.

The final insult (I hear) is that Willis gets away with his vigilantism with no lawful or emotional consequences besides a dead wife.

As a counterpoint, the producers behind the show “24” are squarely in the conservative, pro-gun camp.

However, they created a show that has its lead, Jack Bauer (played expertly by Kiefer Sutherland), facing emotional consequences for working on the fringes of the law.

Its ideas defy the moral contract keeping us from sliding into lawlessness.

The idea of a lawless nation should scare even the most earnest responsible gun owner. I mean, isn’t that why you’re hoarding all those guns?

I give Mr. Roth props for defending his movie in the face of public outrage after the Parkland school shooting. I even applaud his desire to start a conversation about guns.

However, I take back one Jamir for his naivete in thinking “Death Wish,” the original “pro-gun vigilante” movie, wouldn’t appear pro-gun.

I also take offense in that, in the IndieWire interview, Mr. Roth believed he was “starting a discussion” on the topic like “Get Out” did for race.

He needs to take that title out of his mouth.

Before you get all giddy because SJWs are snowflaking over “Death Wish,” remember they’re upset because of the potentially negative influence the movie’s one-sided viewpoint presents in a time when support for elements of gun control poll above eighty percent.

You got upset because of a Black stormtrooper and female Ghostbusters.